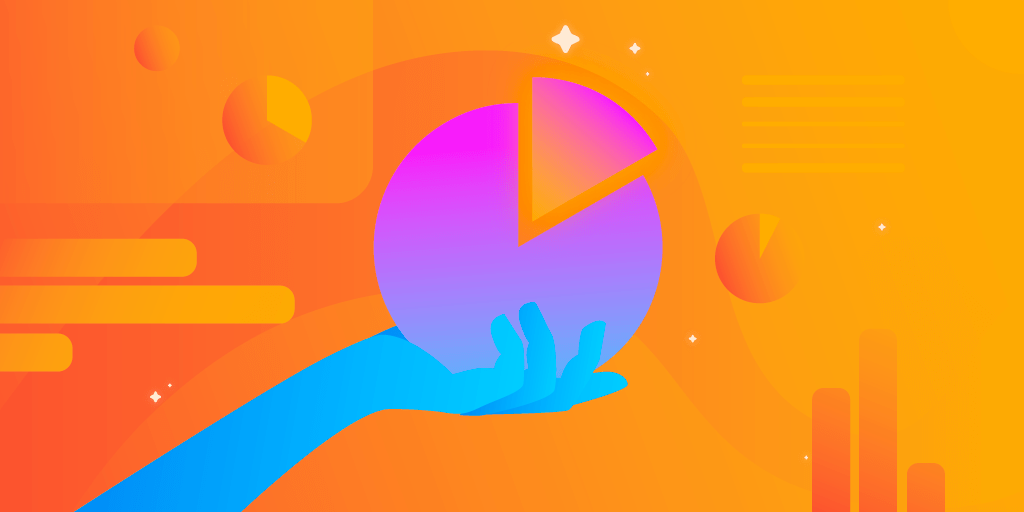 Codemagic builds and tests your app after every commit, notifies selected team members and releases to the end user. Automatically. Get started

Editor’s Note: This post was originally published in November 2019 and has been updated in March 2020 and in August 2020. Codemagic YAML is no longer in beta. You can now build native iOS, native Android, Flutter and React Native apps with Codemagic CI/CD.

You can now download the configurations saved in your Codemagic UI in a YAML file format. Using this file you can customize the workflow pipelines used while building the app on Codemagic. You can just keep this file in your project repository and it will get detected automatically.

How to get the YAML file?

You can easily download the codemagic.yaml file from the Codemagic UI.

>> Read more how to add Flutter to your new or existing native Android project.

>> Read more how to add Flutter to your new or existing native iOS project. 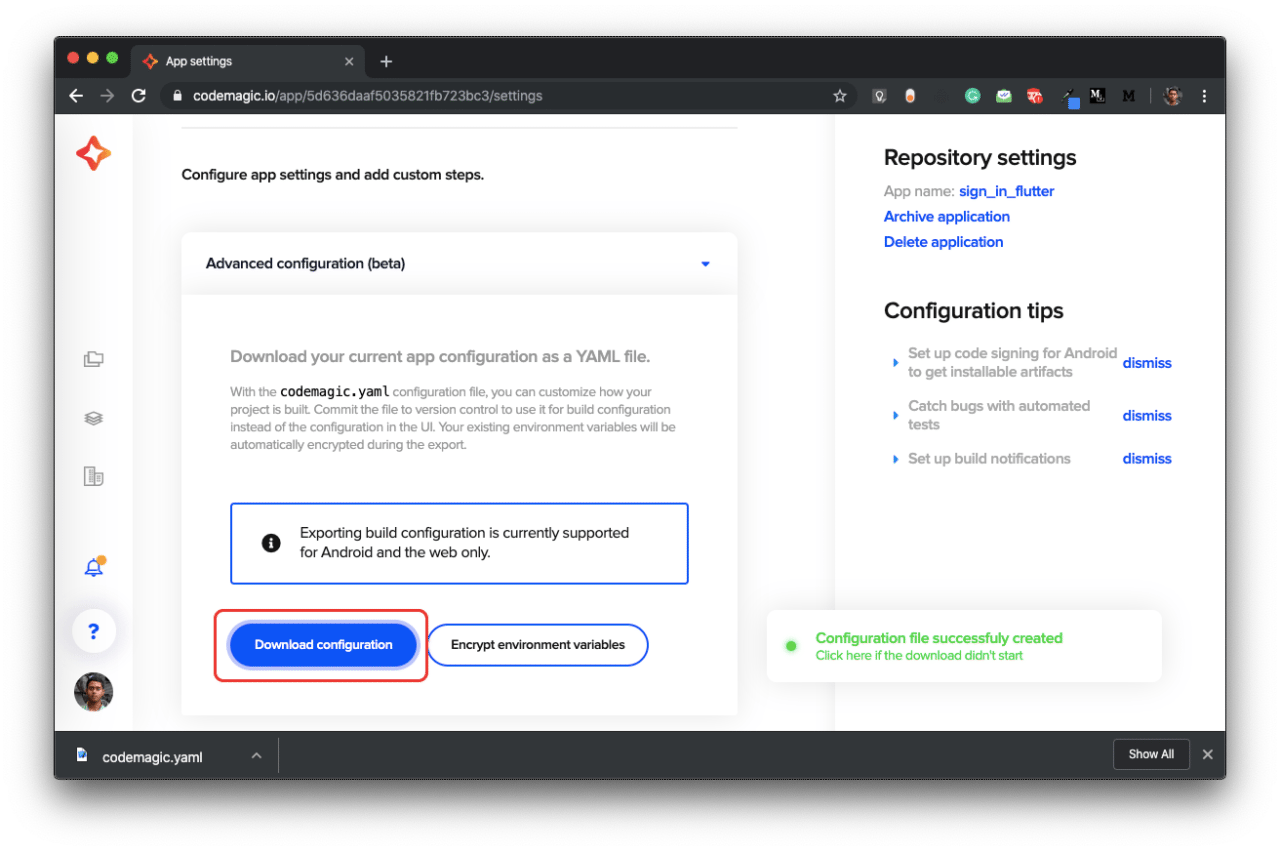 If you want the file to get automatically detected by Codemagic UI next time, then just place the file in your project repository.

Now let’s take a look what’s inside the codemagic.yaml file.

In this example, I will be using the codemagic.yaml file of the project sign_in_flutter.

First of all, if you collapse all the inner sections of the code in your code editor, you will see that the main heading is the workflows which contains all the workflows present in the project (defined in the Codemagic UI). 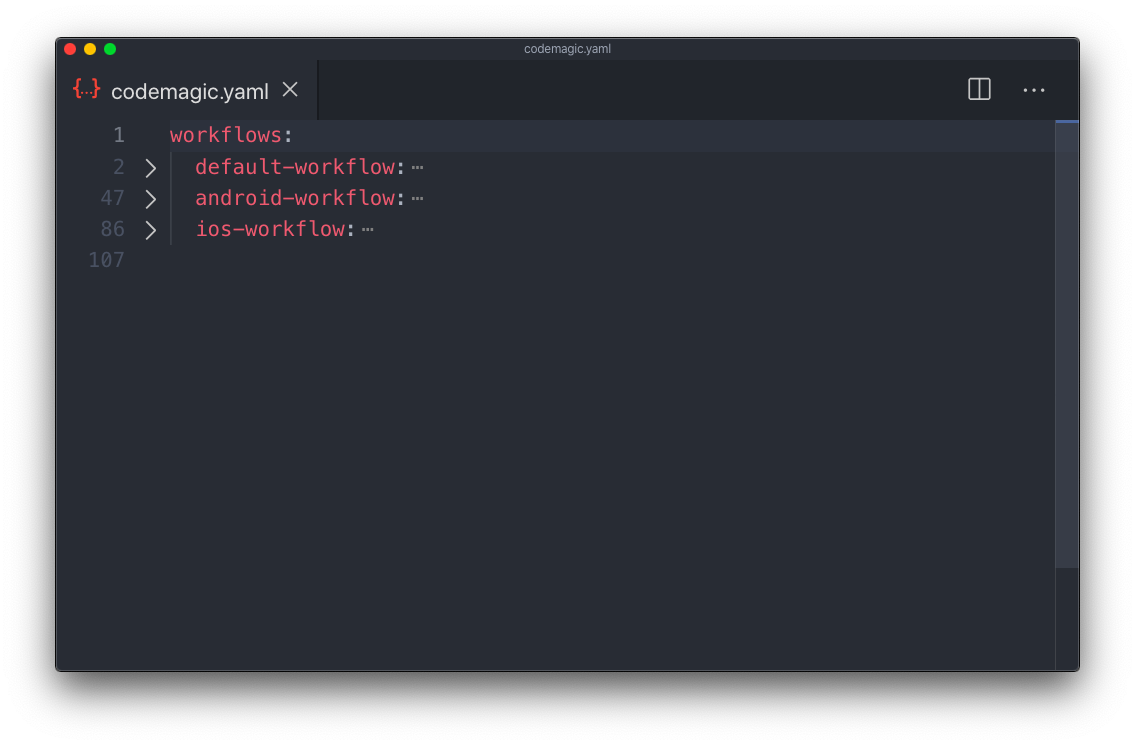 There are three workflows:

If you want to know how to create multiple workflows, take a look at this article here.

Now, if you expand the default-workflow, you will see that it contains five sub-headings: 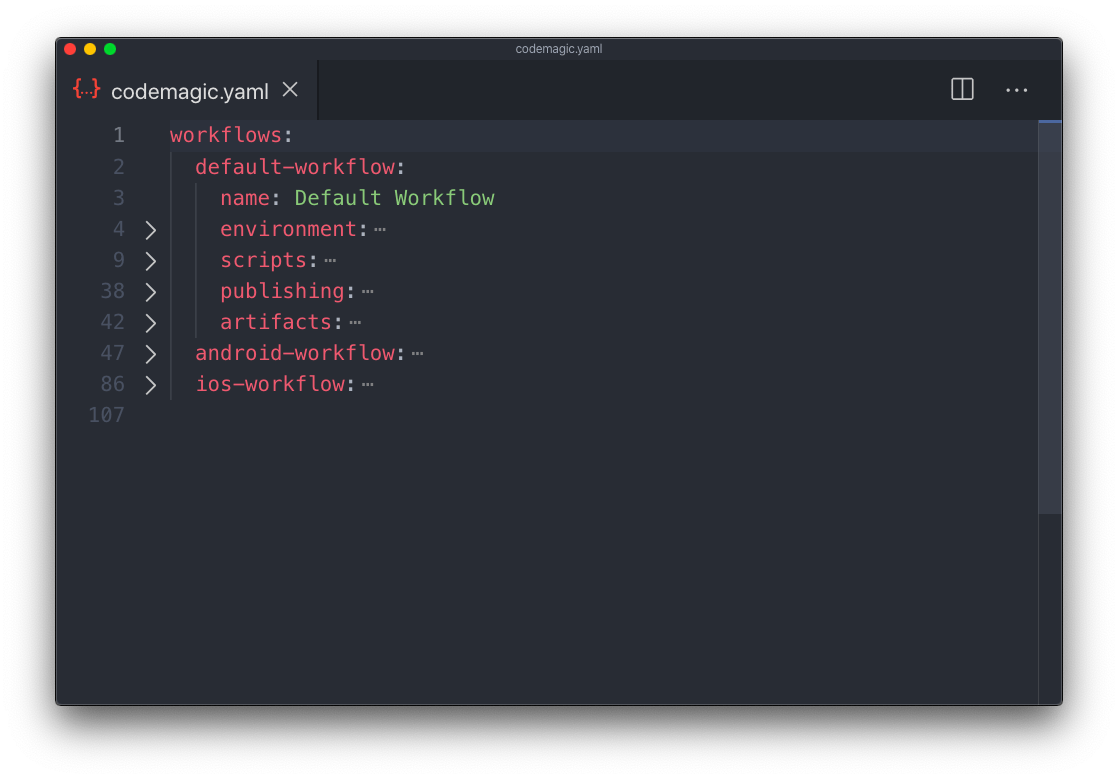 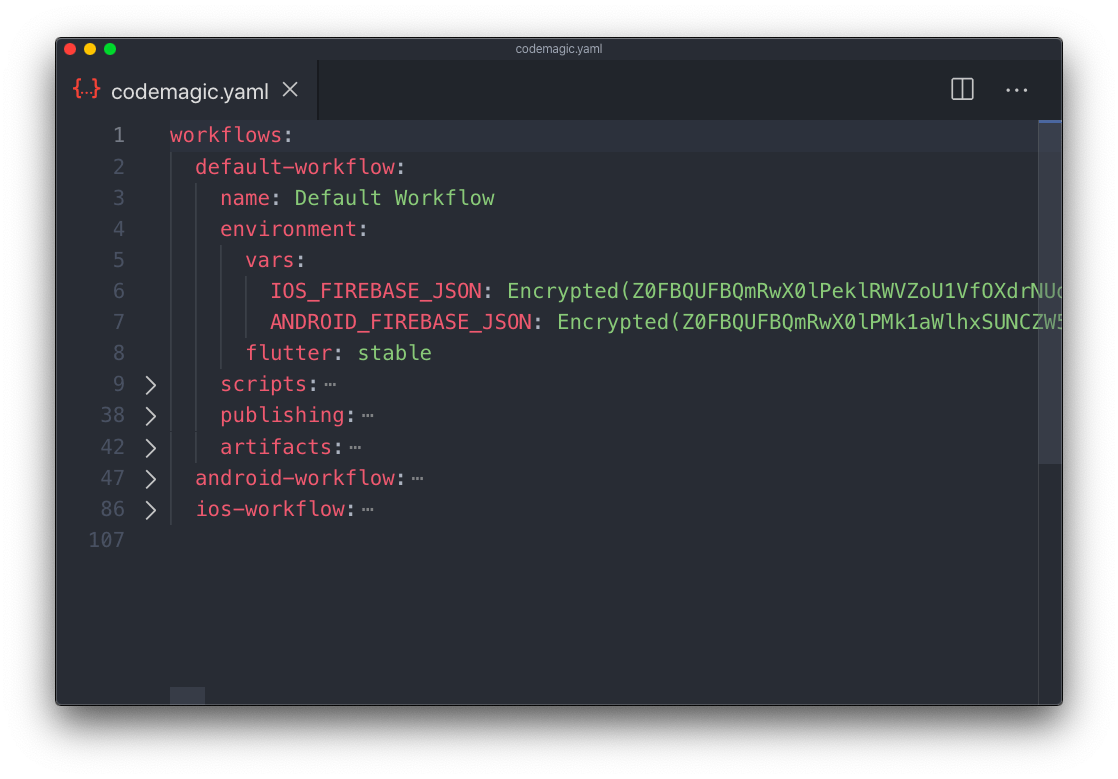 If you look into the environment section, you will see that it contains two environment variables:

The environment tab also contains the Flutter channel that you want to use while building the app, here it is set to stable branch. 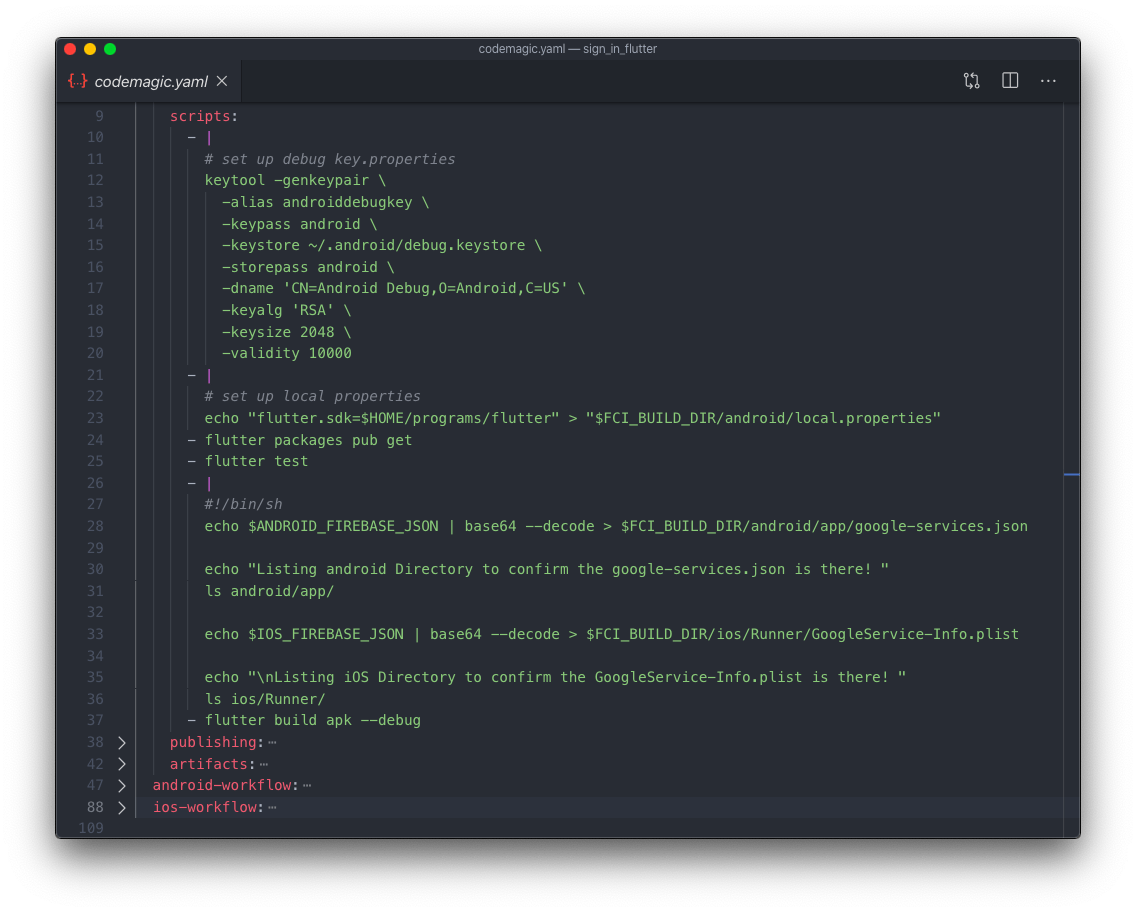 The scripts tab contains the whole pipeline for the build.

The script contains certain commands for the following: 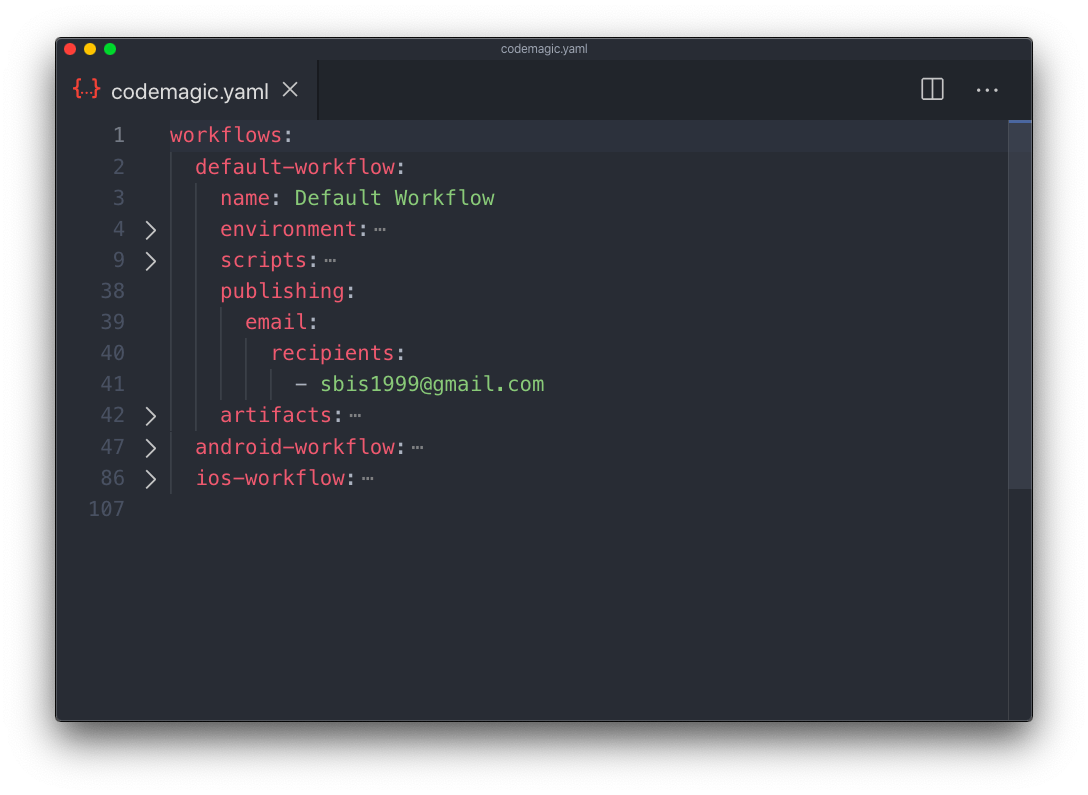 The publishing section contains information to specify where the app should be published after building.

Here, only email is used for publishing. You can add other publishing methods that Codemagic supports, like Slack, Google Play Store, App Store Connect. 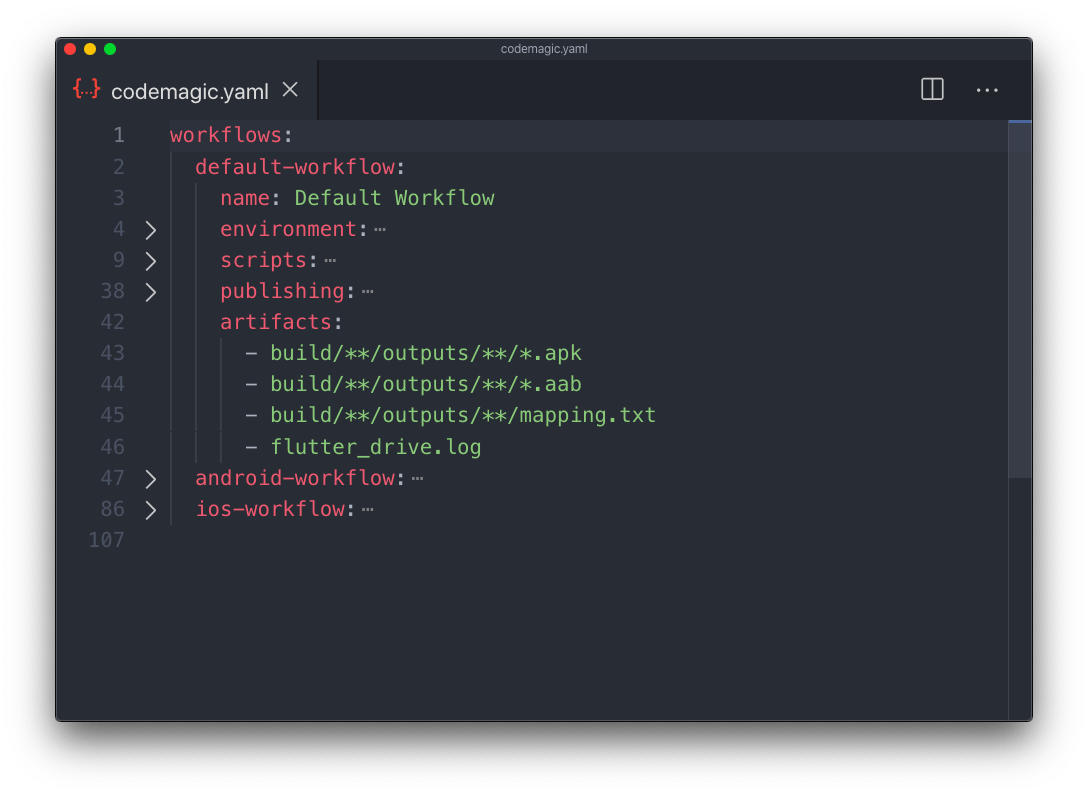 The artifacts section contains all the output files that will be created after the build process.

How to use the YAML file?

Now, I will show you how to use codemagic.yaml from Codemagic Web UI during build.

there are a number of advantages of using the YAML file.

The Codemagic YAML file will really help you improve your development speed and keep you organized as you do not have to go to the Codemagic UI everytime for making any changes to the pipeline. Just make the changes to codemagic.yaml file and commit it to version control system, and you are good to go.