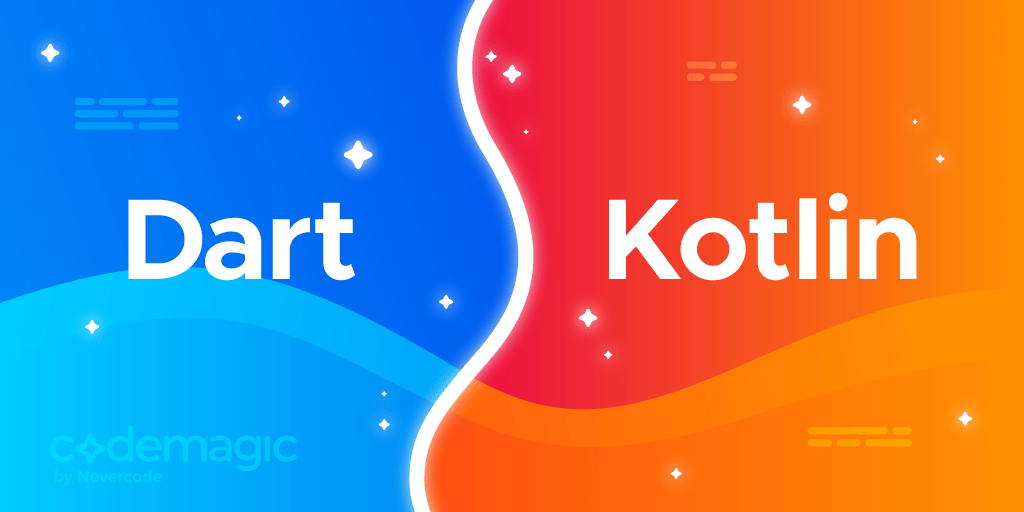 Dart vs Kotlin? Both Dart and Kotlin have been gaining a lot of traction in recent years, though they have been around for a pretty long time.

At Google I/O 2019, it was announced that Android would become Kotlin-first.

Until now, you may have thought that Dart (used by Flutter) is the only reasonable option between these two languages if you want to build cross-platform apps and that if you are only getting into Android development, then Kotlin is the best choice.

However, KMM (Kotlin Multiplatform Mobile) also provides cross-platform app support. We will discuss it in more detail later in this article.

Disclaimer: The focus of this article is to capture the essence of both languages rather than their partner frameworks.

So, let’s get started, but first, let us know what’s your relationship with CI/CD tools?

I haven’t used any

Use it for distribution

About the languages – Dart and Kotlin

Dart was founded by Lars Bak and Kasper Lund, and version 1.0 of the language was released in November 2013. Initially, Dart was created with a focus on web applications, but since then, there have been a lot of changes up until the August 2018 release of Dart 2.0, which was optimized for writing cross-platform applications. Dart was also used at Google for some large-scale production applications, the most well known being AdWords.

Kotlin was created by Andrey Breslav, later backed by JetBrains, and distributed under the Apache 2 Open Source license. Version 1.0 was released in February 2016. Kotlin is a modern, expressive and concise programming language that helps in reducing common coding errors, and its interoperability with Java gave it a boost among those who were already in the Java ecosystem.

A type system is a set of rules that determine the type of a language construct. This set of rules allows us to ensure that all the parts of our program integrate consistently. Also, a clear and robust type system allows the compiler to execute low-level optimizations that improve the code.

However, you cannot use this dynamic type in regular Kotlin code targeting the JVM, as it will produce the following error:

Some of the main properties of the Kotlin type system are as follows:

Dart 2 is also a statically typed language. It supports sound typing and now further extends it with sound null safety support (currently in BETA). Soundness guarantees that types are correct via a combination of static and (when needed) runtime checking. It also generates smaller and faster code, particularly in an ahead-of-time (AOT) setting.

The above code when compiled in:

Check out this article for more information.

Even with type-safe Dart, you can annotate any variable with dynamic if you need the flexibility of a dynamic language. The dynamic type itself is static but can contain any type at runtime. Of course, this removes many of the benefits of a type-safe language for that variable.

Some important points to note about Dart’s type system:

Before going deep into the syntax of the languages, let’s take a look at a very simple “Hello world!” program and see if there are any basic syntax differences between these two languages – Dart and Kotlin.

Meanwhile, in the Kotlin program, a function is defined using the fun keyword followed by the function name main, which contains a very similar print statement to the one in the Dart program. But notice that here, a semicolon isn’t required to end a statement.

Now, let’s look into other syntactical differences between these two languages.

Dart vs Kotlin: The syntax

Dart and Kotlin are both modern programming languages. Here, we will see some simple syntactical comparisons between these two languages, sorted into a few major categories. 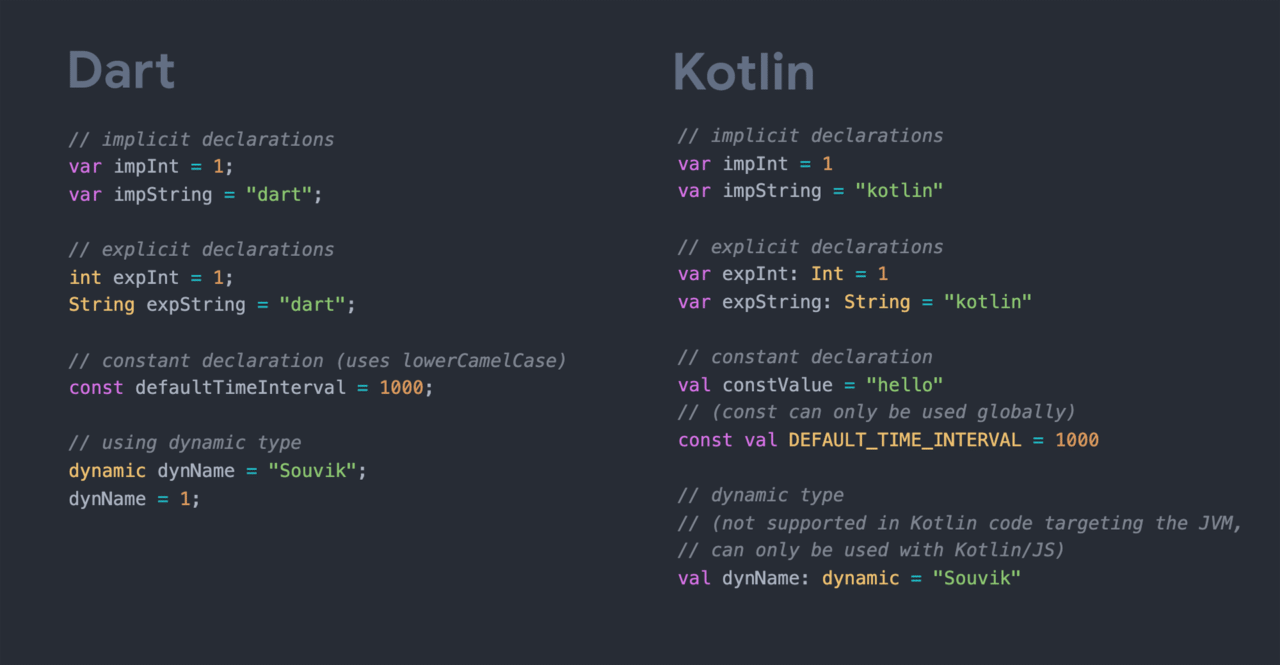 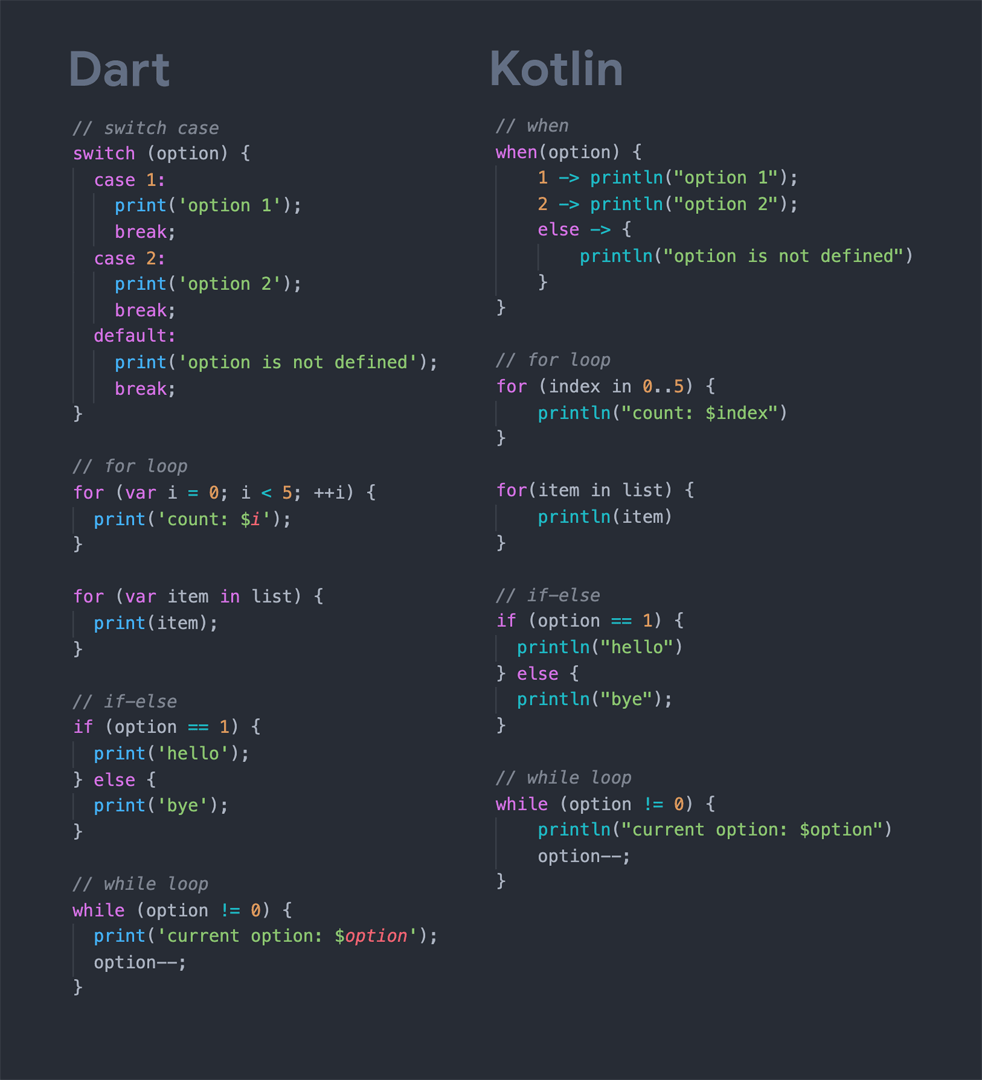 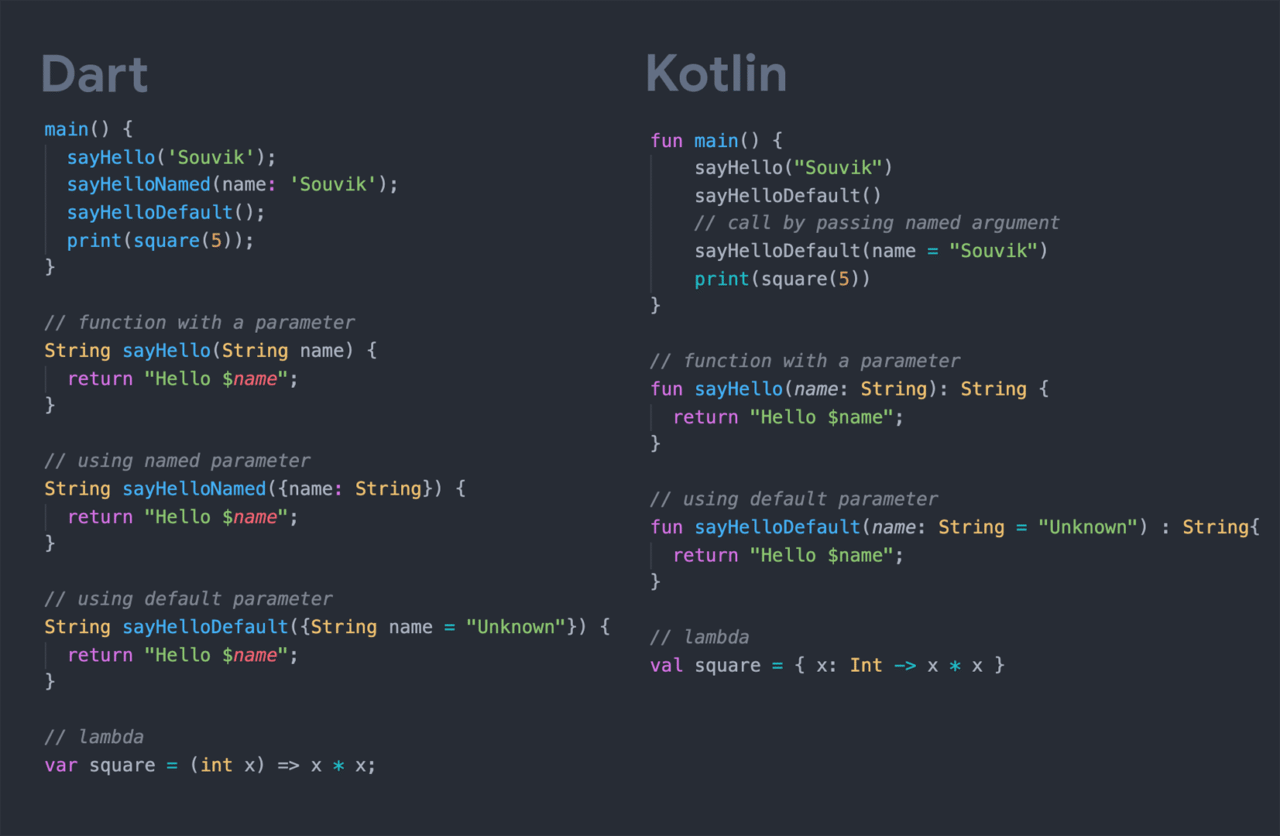 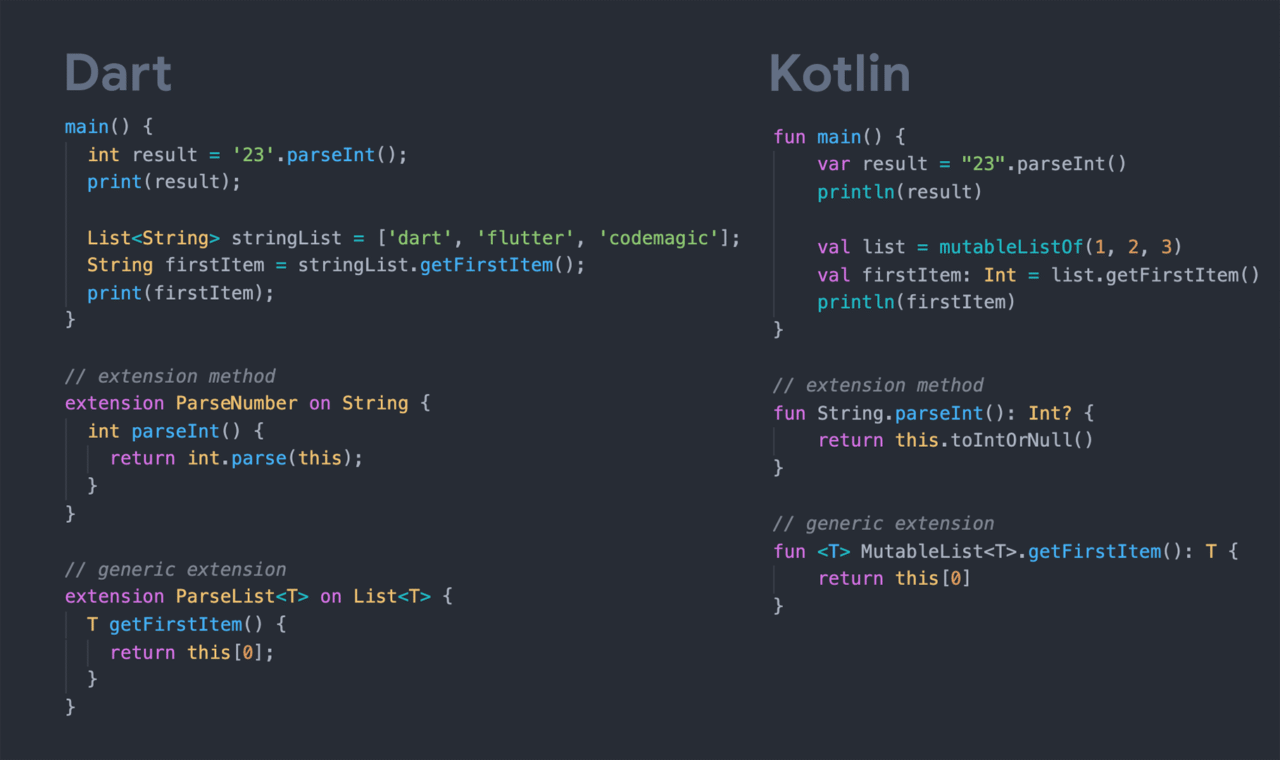 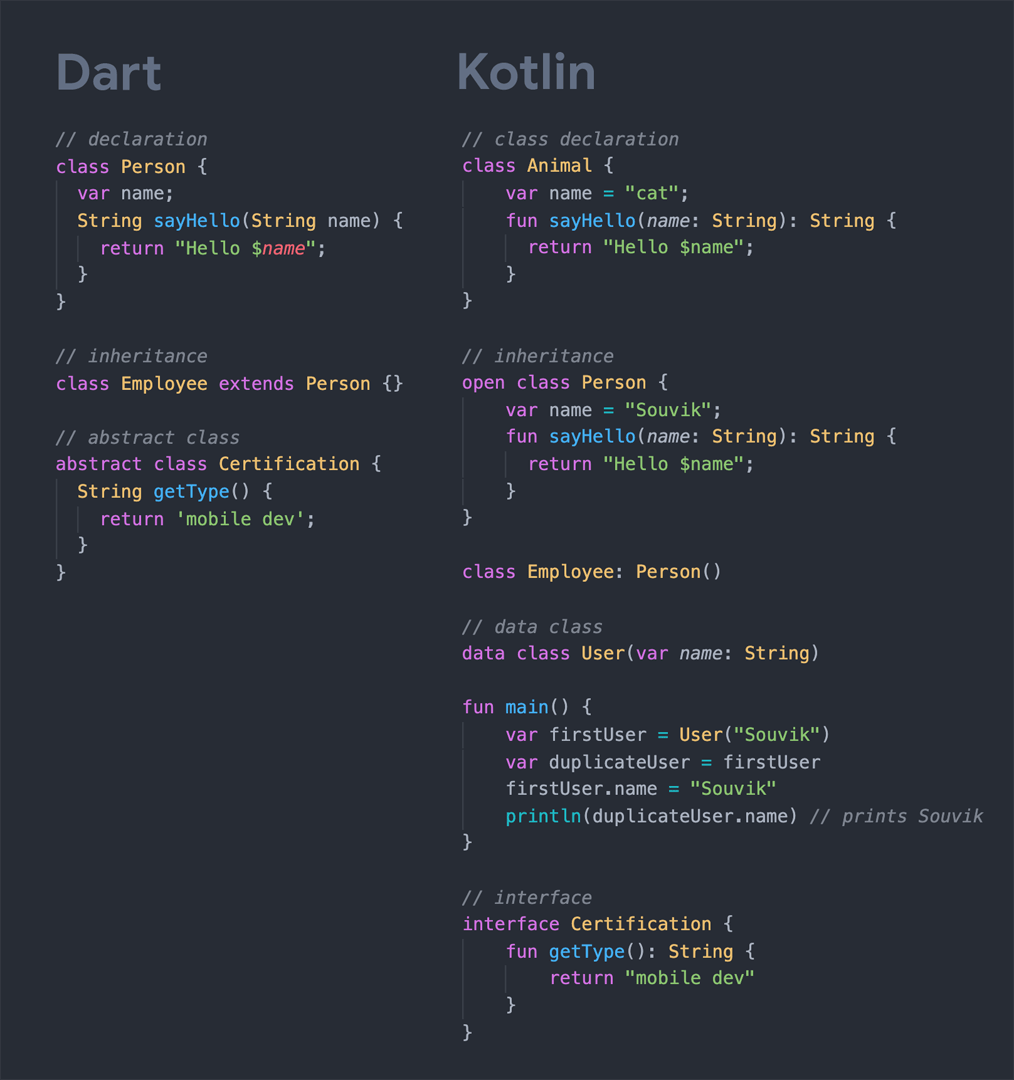 Kotlin’s type system uses null safety by default, as it can distinguish between references that can hold null (nullable references) and those that cannot (non-null references). This is aimed to eliminate NullPointerException from the code. The only possible causes of NPE are:

The Kotlin code above shows the default String type declaration, which doesn’t allow the variable to be null.

To allow null values, we can declare a variable like this:

To get a better idea of Kotlin null safety and the operators related to it, check out the documentation.

Dart’s null safety is currently in beta. Unlike Kotlin’s null safety, Dart supports sound null safety. Soundness enables more compiler optimizations and helps the code to run even faster compared to normal null safety. If the type system determines that something isn’t null, then that thing can never be null. Once an entire project is migrated to Dart’s null safety (including its dependencies), you can take full advantage of soundness, resulting in not only fewer bugs but also smaller binaries and faster execution.

In order to make it nullable, you have to declare it like this:

Unlike many other languages with similar capabilities, async and await are not keywords in Kotlin and are not even part of its standard library. Kotlin’s best approach to asynchronous programming is through the use of coroutines. However, there were a number of approaches to solving this problem in the past, like:

In the past, threads were the most well-known approach to prevent applications from blocking. But there are a lot of limitations of threading:

Coroutines were presented to solve all these issues. Coroutines are basically lightweight threads.

A simple example of Kotlin code using a coroutine:

The output will be:

One more very important concept that goes alongside coroutines is Kotlin Flow, which helps in returning multiple asynchronously computed values.

To perform asynchronous operations in Dart, you can use the Future class with the async and await keywords.

A future represents the result of an asynchronous operation and can have two states: uncompleted or completed.

The output will be:

Check out this codelab on Dart asynchronous programming for more information.

Dart vs Kotlin: Usage in their partner frameworks

As I discussed earlier, both of these languages gained a lot of attention due to their partner frameworks, Kotlin for Android and Dart for Flutter. Flutter’s basic architecture is more UI-centric than that of Android, and Dart is really a good fit for this approach.

Let’s take a look at a very simple “Hello, world” application built using these two frameworks. Here, a single button is used to change the text from “Initial Text” to “Hello world!” and vice versa. 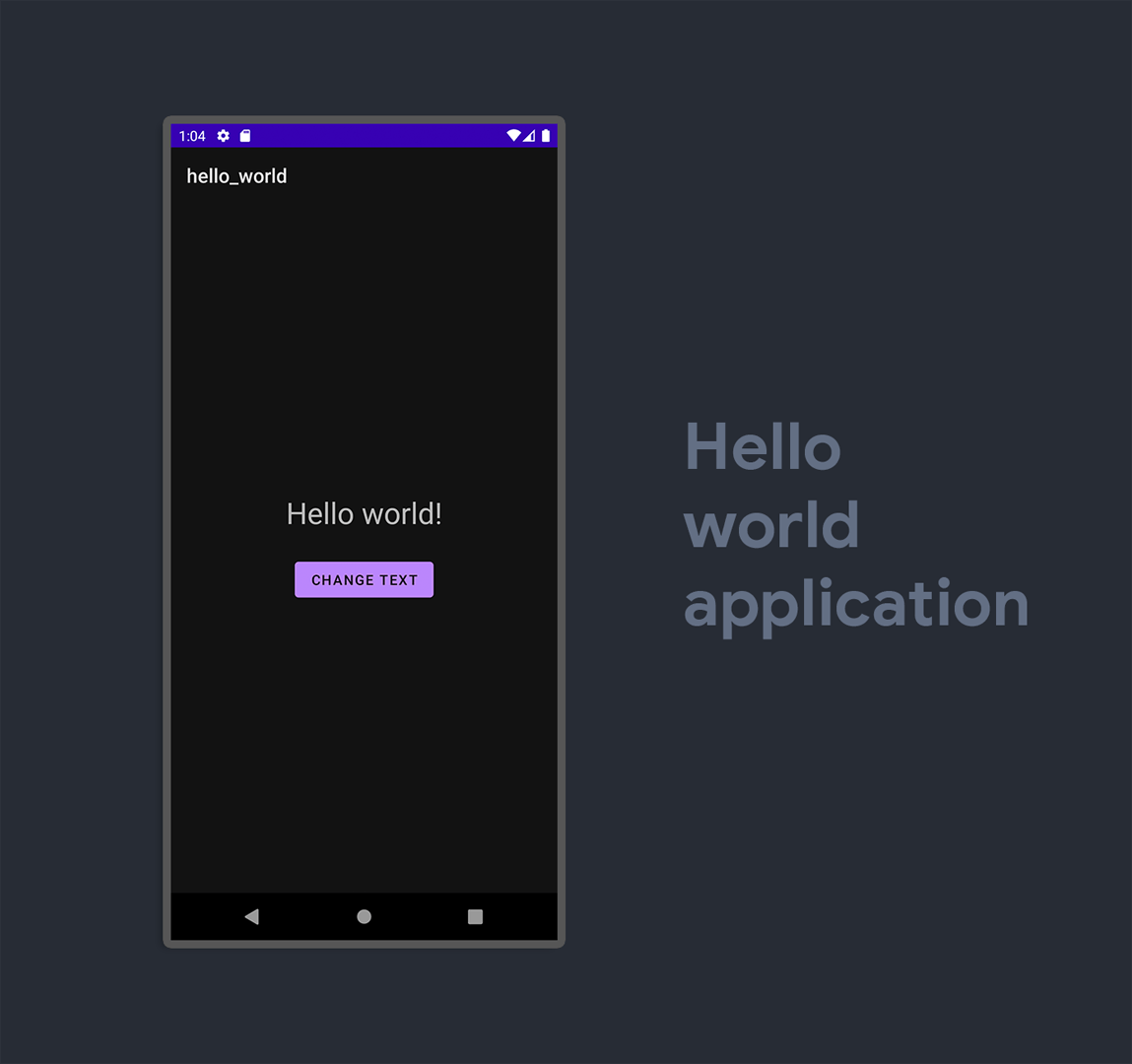 The Kotlin code is as follows:

And the activity_main.xml layout code is:

Similarly, the Dart code of the Flutter app is as follows:

Dart vs Kotlin – which has better cross-platform support?

Kotlin also has a type of cross-platform support called Kotlin Multiplatform Mobile (KMM). It allows you to use a single codebase for the business logic of iOS and Android apps and implement a native UI by writing platform-specific code on top of it.

A getting started guide for KMM is available here.

Both the Dart and Kotlin languages have a robust tooling ecosystem that is growing rapidly.

Both of the languages provide CLI support, so you can run Dart and Kotlin apps from the terminal.

Running Kotlin apps from the CLI:

Running Dart apps from the CLI:

The IDEs that you can use for writing Kotlin code are:

For building your Dart apps, the IDEs you can use are:

You can use Gradle and Maven dependencies along with your Kotlin app.

You can include dependencies in your Dart project using the pub package manager by defining them inside the pubspec.yaml file. You can easily search for any Dart/Flutter package by going to pub.dev.

There is an awesome range of CI/CD support for Android apps built using Kotlin. Some of the most well known of them are as follows:

Check out the Getting Started guide here.

This article should have provided you with enough information about both Dart and Kotlin that if you want to move from one language to the other, you have some idea about the syntactical differences between them, as well as the ecosystems of the languages.

What do you prefer – Dart or Kotlin? 🤔 Let us know on Twitter.