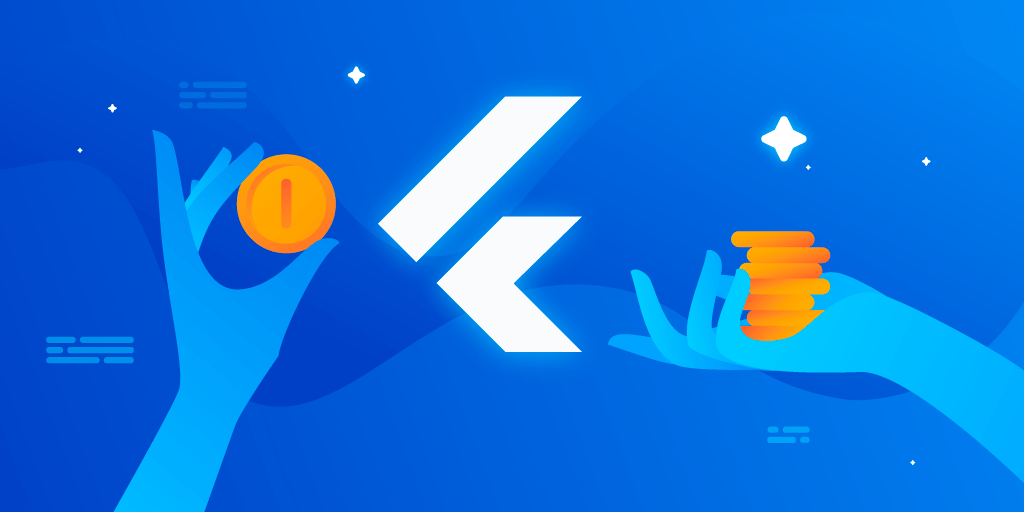 How Much Does Flutter App Development Cost

Either you want to shop or order food online, mobile apps have got you with almost everything that could not even have been imagined just a few years ago. They had made our lifestyle unbelievably simpler ever and thus they need to be as easy & smooth as possible. Google’s Flutter is a renowned Cross-platform that delivers easy to access service for rich user experience. Since its relaunch in 2017, Flutter took a high jump to come into the spotlight and right after that, it grabs a secure position in the wishlist of every mobile app developer.

If you are also looking for a Cross-platform app that performs the advantages of Native, opt Flutter app development. Hire dedicated Flutter developers for rapid and reliable development of Flutter apps that operates efficiently on iOS, Windows, and Android simultaneously. Whether it is a small-scale enterprise, middle-level organization or a startup company, Flutter brings benefits to every business.

Through a Flutter project, you can comparatively bring down the app development and maintenance expenses up to 60 % in your business. Let’s see how.

Flutter is an open-source UI software development toolkit from Google. It provides an ease of viewing documentation and posting issues for Flutter programmers in an open developer forum. Consequently, it becomes easier for them to learn and work on Flutter. Hence, their productivity and efficiency increases and results in cost-saving with time reduction in app development.

Flutter allows designers and programmers to write code once and they can use the same code for application development on both the Android and iOS platforms. Consequently, it reduces their time to write code for applications to run on different platforms. Also, the ease of single codebase reduces time consumption in the process of testing the application across different platforms which results in cost saving for mobile app development to a greater extent.

Flutter mobile app development avails programmers with an outstanding time-saving feature named Hot Reload. This feature allows Flutter developers to see the output instantly for the changes made to code and thus they can improve the performance of the app in terms of execution.

Well, with the increase in the size of application Flutter app developers have to rethink about using this feature effectively. To do so, the Flutter has its dependency management system called Pub. A package manager containing reusable libraries and packages for Dart programming languages. This, in turn, ends up the need for writing code in excess for developing an app and results in cost savings.

However, the Flutter mobile app development kit comes with SDK widget library still developers can create new widgets as per their requirements. Widgets play an important role in constructing UI and for its declaration. Also, it avails Flutter app developers with ease of customization of apps. The applications designed and developed using Flutter feature a seamless user interface and enable users with a long-lasting experience.

The application developed on Flutter framework executes fast on any platform. Because it uses a fast, simple, programming language- Dart which can easily be compiled into native code. The reason behind, it does not access OEM widgets owing to having its own widgets. Thus the performance increases with a speed of 60 FPS. So, developing a Cross-platform application using Flutter is a good approach for time and cost-saving instead of developing separate apps in native code.

Flutter offers solid testing support to quality analysts. With Flutter, they can perform testing at different levels as a unit, UI. Widget testing is one of the best testing features Flutter provides. It avails quality analysts with fast UI testing as similar they perform unit tests. For which, Flutter holds a separate package named Flutter Driver to perform tests easily and effectively. Hence, time and manpower utilized to exercise testing, reduces to a greater extent turns Flutter mobile app development into a cost-effective measure.

The app development using Flutter framework is highly preferable among business owners and developers nowadays because it offers a few extra perks and features. The most appreciated among them is its compatibility to run on different platforms like Android and iOS. Because it ends up the need of developing separate applications which result in cost reduction. The cost estimation of developing a Flutter app depends on several factors. However, we are mentioning a few major factors which affect the costing of Flutter app development.

App design is the first thing that grabs the attention of any spectator so the design should be impressive as we had already heard the famous quote “first impression is the last impression”. If further categorise app designing it consists of UX and UI wherein UX stands for user experience while UI represents user interface. So we can say that designing is an integration of two parts:

The cost of a complex mobile application with lots of colours, images and animations will always be more than a simple application with just a few images. Because the factors like dynamics, app representation, live images, no. of display options increase the complexity of a Flutter app designing.

In an application, the backend can be understood as a backbone as similar to a human body that helps a person to walk. The user only gets to see the outer periphery of an application but the hidden part backend is elusive and performs all the associated operations. For a mobile application, the backend is like a brain which controls several aspects like the app data, server, real-time chatbots, app security, and data backups. The backend plays a major part in determining the cost of a Flutter application.

Modern-day application development is entirely focused on developing a feature-rich application capable of fulfilling all user requirements. The mobile app development for customer-oriented businesses opens up wide possibilities whether it is a game application or an online store.

A custom-made mobile application with customer-centric features is the need of the hour for any industry. Since it is capable of performing almost everything virtually. Thus, the cost of application development increases based on incorporated advancements from hundreds to thousands.

Mainly we observe the development of three types of applications in the market.

List View Application - It is the optimized version of the company’s website with a host of basic features in the application menu.

Dynamic Application — Applications based on a server-side and provide real-time access to data for personalized user experience. These applications are dynamic in nature. For example- Facebook, Instagram, etc.

Gaming Application — It could either be a simple gaming app or a complex one with high-resolution animations, 3D graphics, AI-enabled features and more.

The development of all these applications follows user requirements. It includes basic features and adds on integrations to make it a perfect tailor-made solution. Further, one can also integrate following functionalities in your mobile as well as Flutter application:

One can make use of an application to its fullest only when it will receive appropriate maintenance at regular intervals. Since every application has some advantages and disadvantages of its own and they can only be analyzed by the users post its launch. So it’s not done with just the application deployment on the play store. Developers have to prepare countless updates and improvements based on user reviews/ feedback and the latest trends.

So, it is necessary to consider maintenance cost in the project earlier to avoid future blunders. Post the application launch, you will always get to see a flow of excessive user feedback which can either be positive or negative. An application is a success or a failure only the users decide its destiny. So it is always required to make small changes or updates to an application depending on their feedback.

One of the most loved and widely used products of Google, Flutter, has emerged as a boon to business owners and mobile app developers across the globe. It not only reduces the cost of app development but also effectively lessens the time consumption in the entire process of development.

Various back-end & front-end factors along with development services, affect the making process and cost of any application. After development, an app needs to be kept regularly updated for efficiently serving the customers section and a Flutter platform presents wonderful resources for the same. For developing a well-equipped featured application at a relatively lower cost, a Flutter mobile app had been a great preference for entrepreneurs and businesses from around the world.

As discussed above, Flutter is a cost-effective platform that slashes the cost of app development by nearly half and bringing down its maintenance expenses by 20%. Henceforth, it perhaps stands as one of the best-delivered projects by Google in the domain of app development.