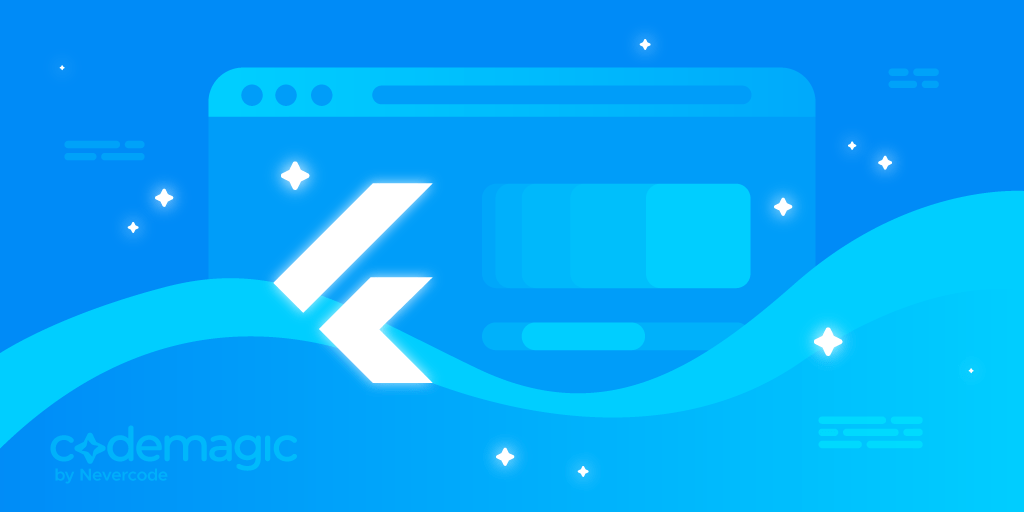 Integration tests help in evaluating the performance of a complete app to verify all the widgets and services work together as expected. Integration testing is also known as end-to-end testing or UI testing.

Flutter uses the integration_test package along with the flutter_driver to run these automated tests on a target device, which can be a physical device or emulator (Android, iOS or the web). You can use the flutter_test APIs with this package to write these tests in a simple manner, similar to writing widget tests.

In this article, we’ll look into an advanced testing style of integration tests called automated screenshot tests. This helps in detecting visual changes in the app’s user interface with every iteration.

⚠️ NOTE: At the time of writing this article, Flutter screenshot testing using the integration_test package is in active development, and you need to be on the Flutter master channel to use it. It is currently only available for Android and the web. Work is in progress for iOS support. Once it’s ready, you should be able to use the same APIs for the iOS platform as well.

Let’s get started by creating a basic Flutter project where we can add the integration tests for taking the screenshots.

Before creating the project, make sure you are on the master branch of Flutter:

If you are not on the correct branch, use the following commands:

Open the project using your favorite IDE. To open it with VS Code, you can use:

You will need to add a few dependencies to the pubspec.yaml file of your project to use integration testing. Add the following under dev_dependencies:

Get the packages using the following command:

The testing script will be a bit different for the web platform compared to the mobile platform (Android). We’ll write it in such a way that it can be used with both platforms.

Use the testWidgets function to start defining the integration test. Give it a name (here, we have given it a name, screenshot) and a callback function.

The pumpWidget method is used to trigger the rendering of the specified widget. In our case, it will be the MyApp widget.

The convertFlutterSurfaceToImage() method helps in converting the Flutter surface to an image view on the Android platform. (This might be different for the iOS platform when it’s ready.) We have used a String to store the platform name – we’ll use this to store the screenshot file along with the name of the platform so that we can easily identify the platform it was taken on.

Finally, we have to make sure at least one frame of the app widget has finished rendering before taking the screenshot.

We will use the onScreenshot property inside the integrationDriver() function to retrieve the screenshot as bytes and store it as a file.

This stores the screenshot as a .png file on the host machine inside the folder screenshots. (The folder is created if it is not already present.) We have wrapped the entire function call inside a try-catch block to avoid any crashes.

While running on the web, this code throws an error, though the screenshot gets saved successfully. There’s also a GitHub issue regarding this. The try-catch block helps to prevent crashes from these types of errors. As this functionality is in a very early stage and still in active development, errors like these are common.

We have finished defining all the test scripts for taking the screenshot, and now we are ready to run. There are some extra steps needed to run it on the web, which we’ll look into in a bit.

To run the screenshot test on mobile (Android), you can use the following command:

Replace the <device_name> with the name of the physical device or the emulator on which you want to run the test. You can get the device names of all the connected devices using the command flutter devices.

This will generate a screenshot with the name screenshot-android.png and store it in the folder screenshots.

Follow the steps below to run the screenshot test on the web.

This will run the test and generate a screenshot with the name screenshot-web.png inside the screenshots folder.

Now, let’s take a look at how you can automate this screenshot generation using Codemagic so that with every commit, you get its respective screenshots. 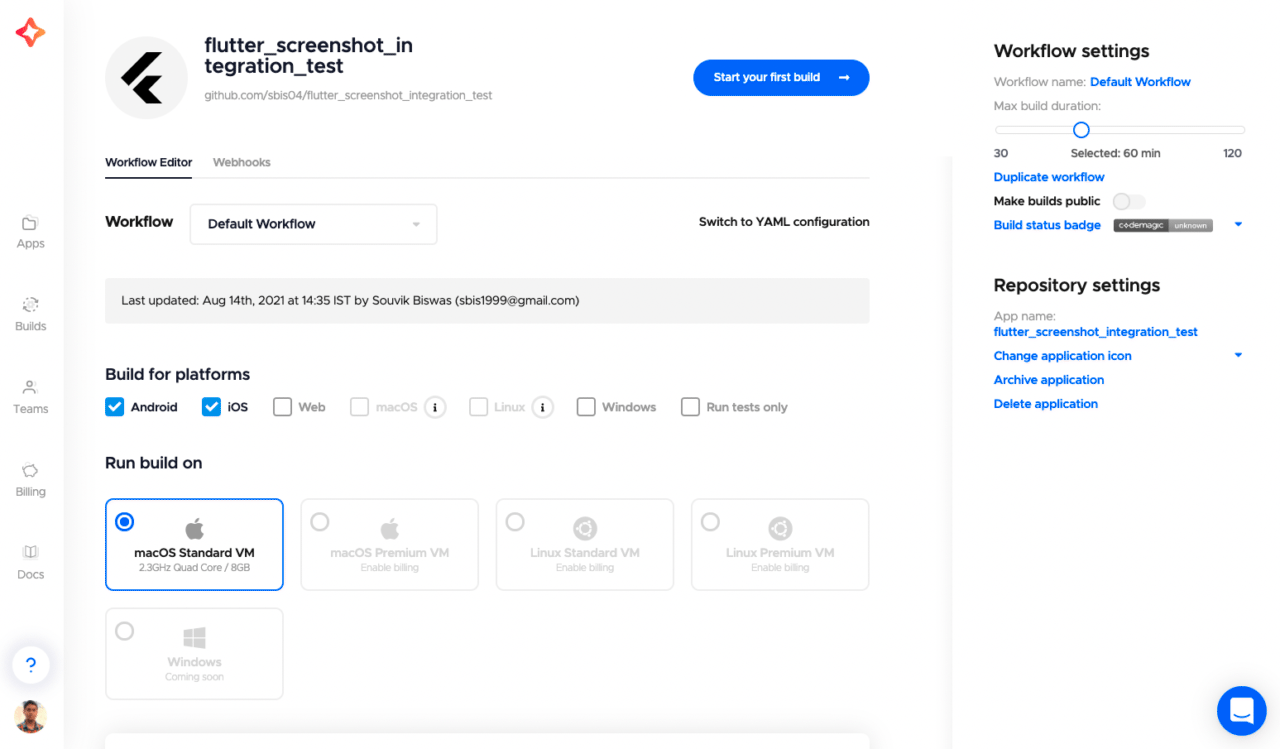 This will add the project repository to Codemagic. For Flutter projects, you have two options: Either you can use the Workflow Editor (default) or Codemagic YAML configuration. We’ll take a look at both of these methods.

With Workflow Editor, you can only run the integration test on one of the platforms at once. Let’s start by configuring the workflow for Android screenshot testing.

Now, you can run the build with this configuration to generate the screenshots. 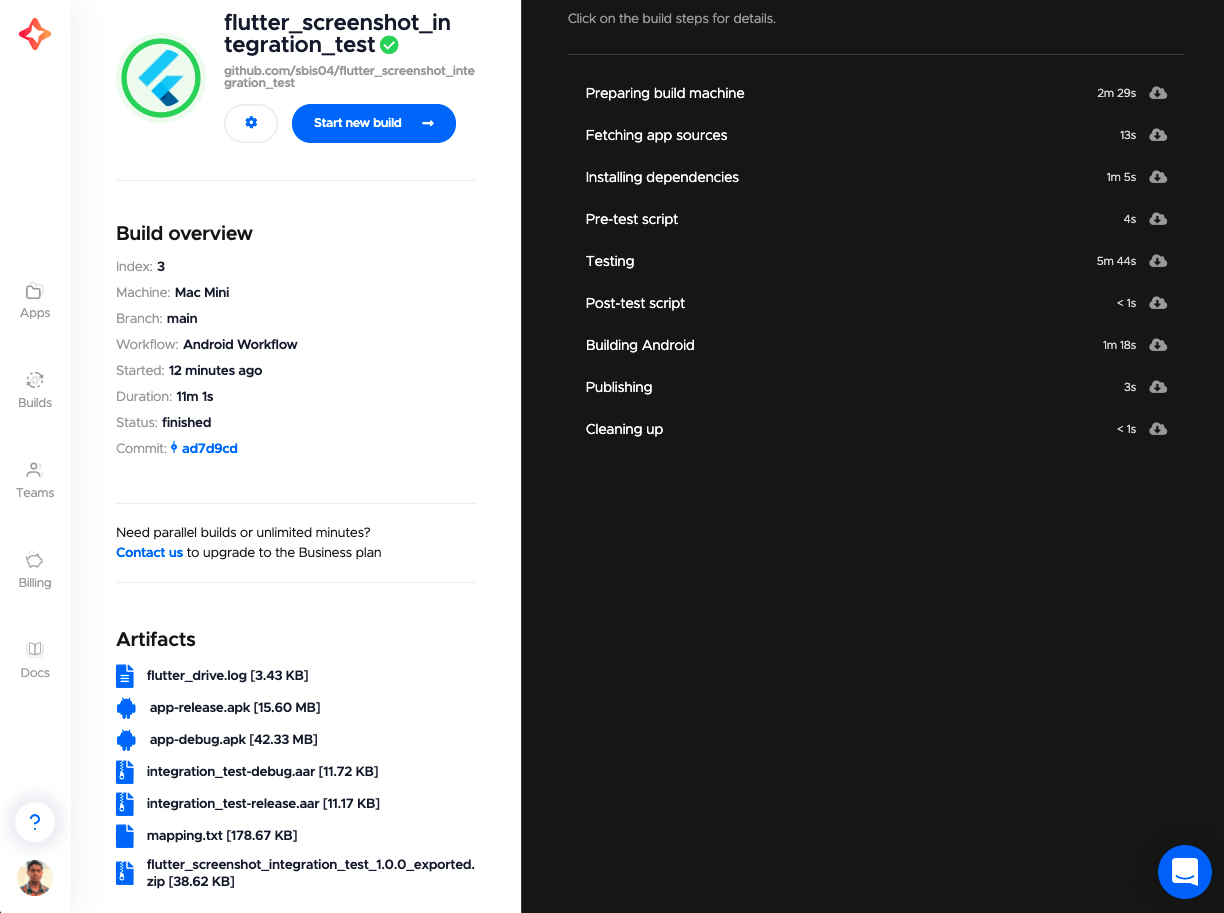 The generated screenshot of the app running on Android: 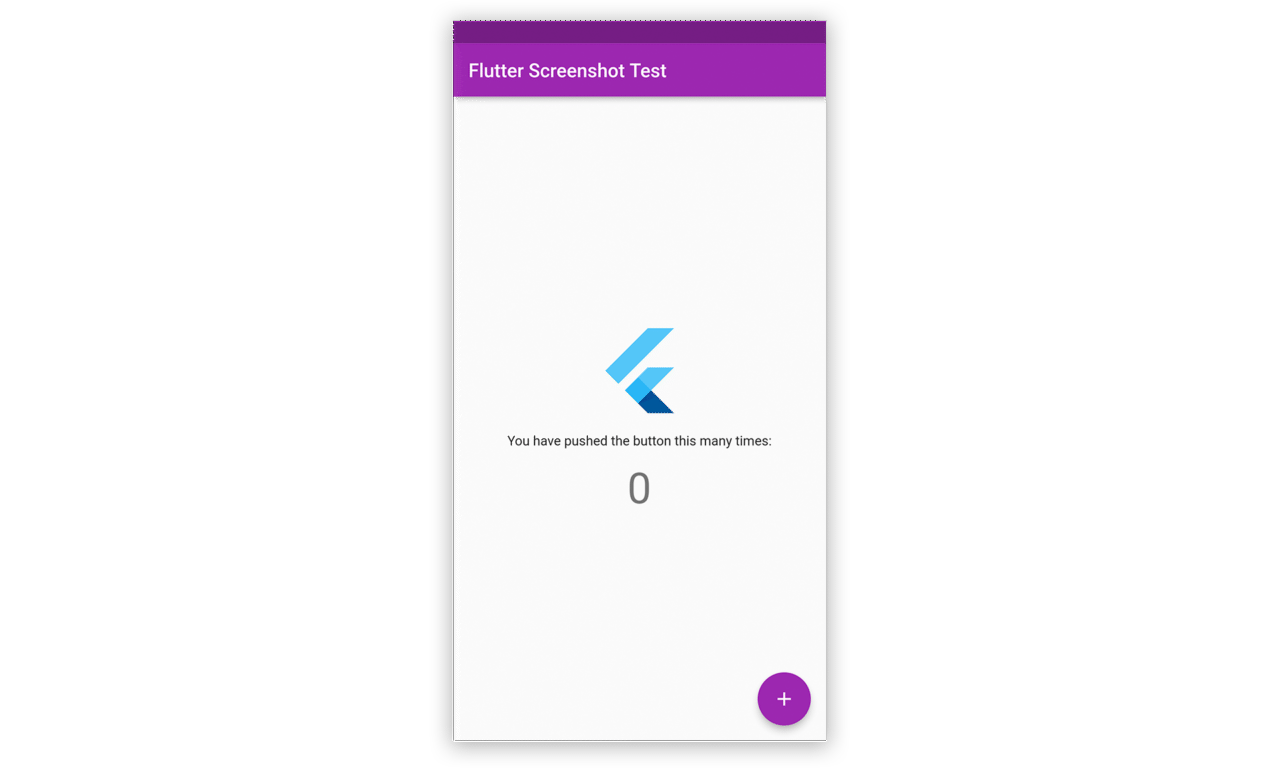 You can use a separate workflow to generate the screenshots for the web platform. On the menu on the right, click on Duplicate workflow under Workflow settings.

You can use this workflow to generate the screenshots of the app running on the web platform. 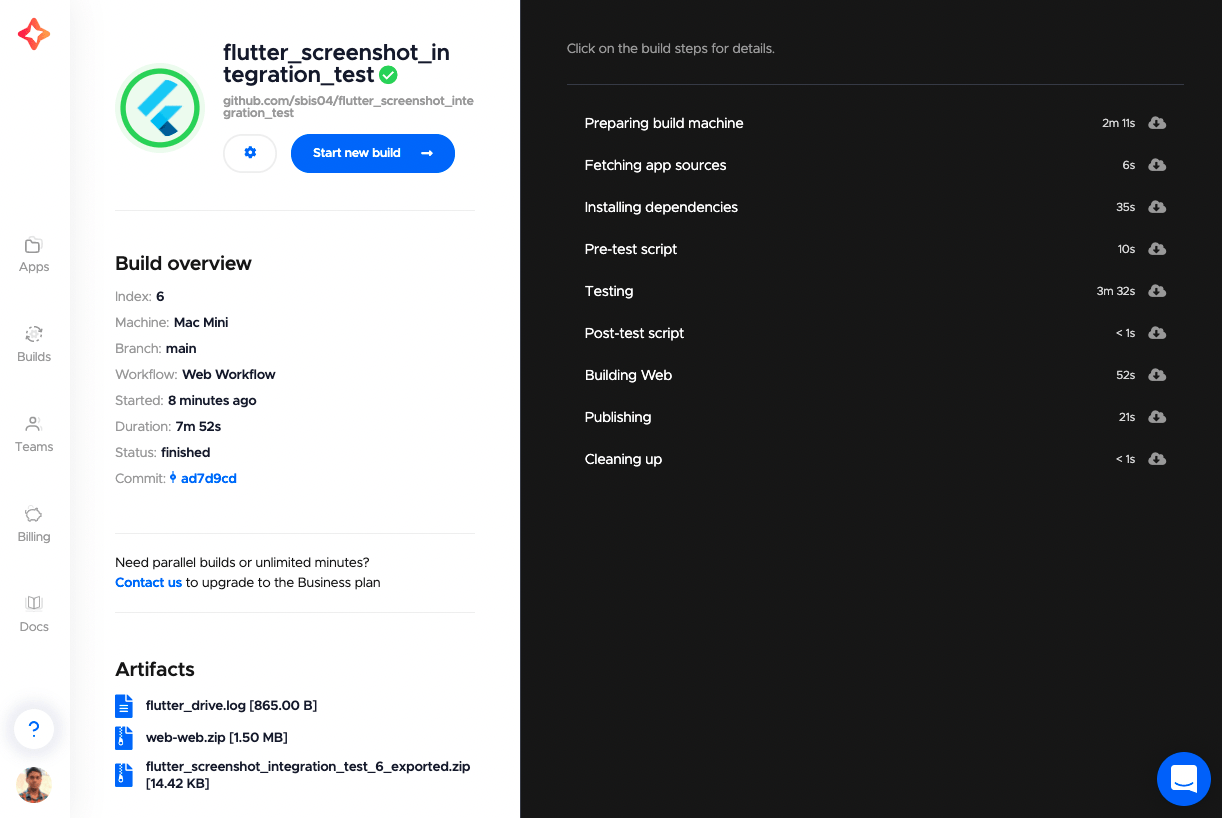 Here is the generated screenshot of the app running on the web: 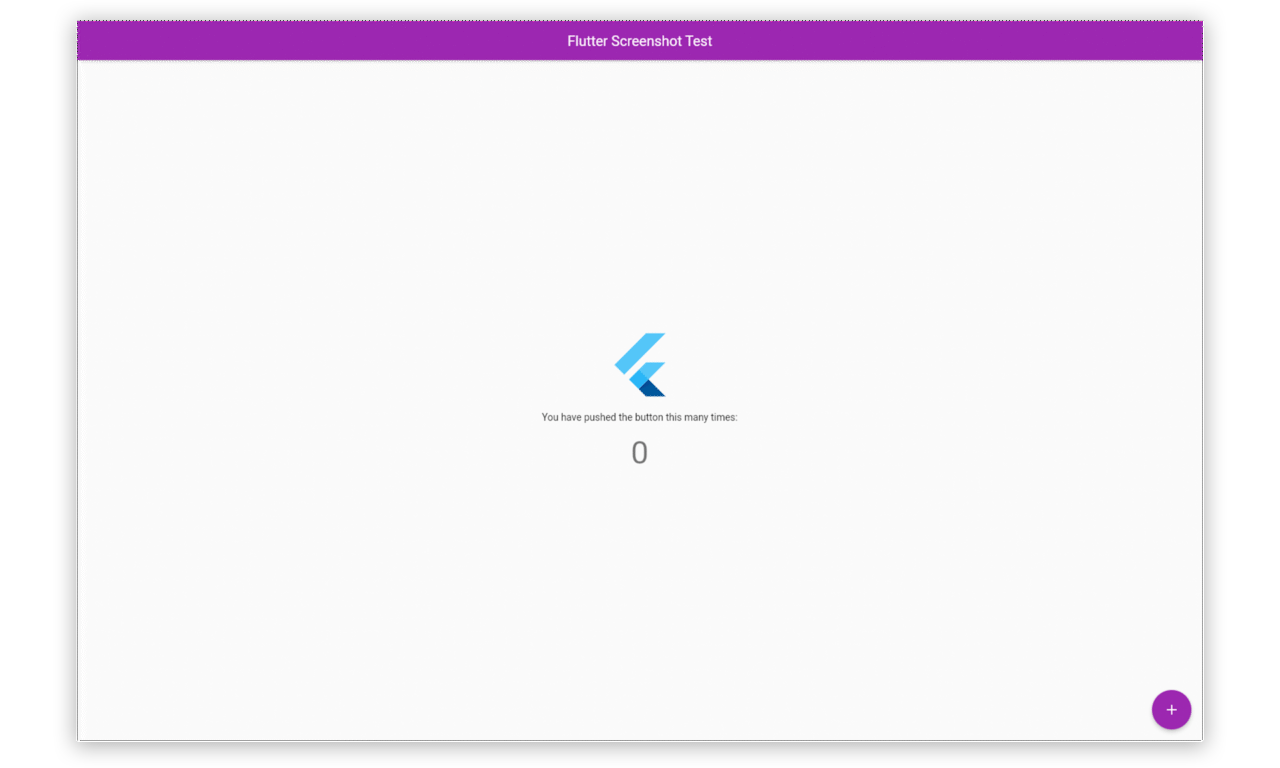 If you are using the codemagic.yaml file, then you can run the screenshot tests on both the Android and web platforms in a single workflow.

I won’t go deep into the YAML script, but you can learn more about the YAML configuration from here.

You can find the codemagic.yaml script here. It contains three workflows: 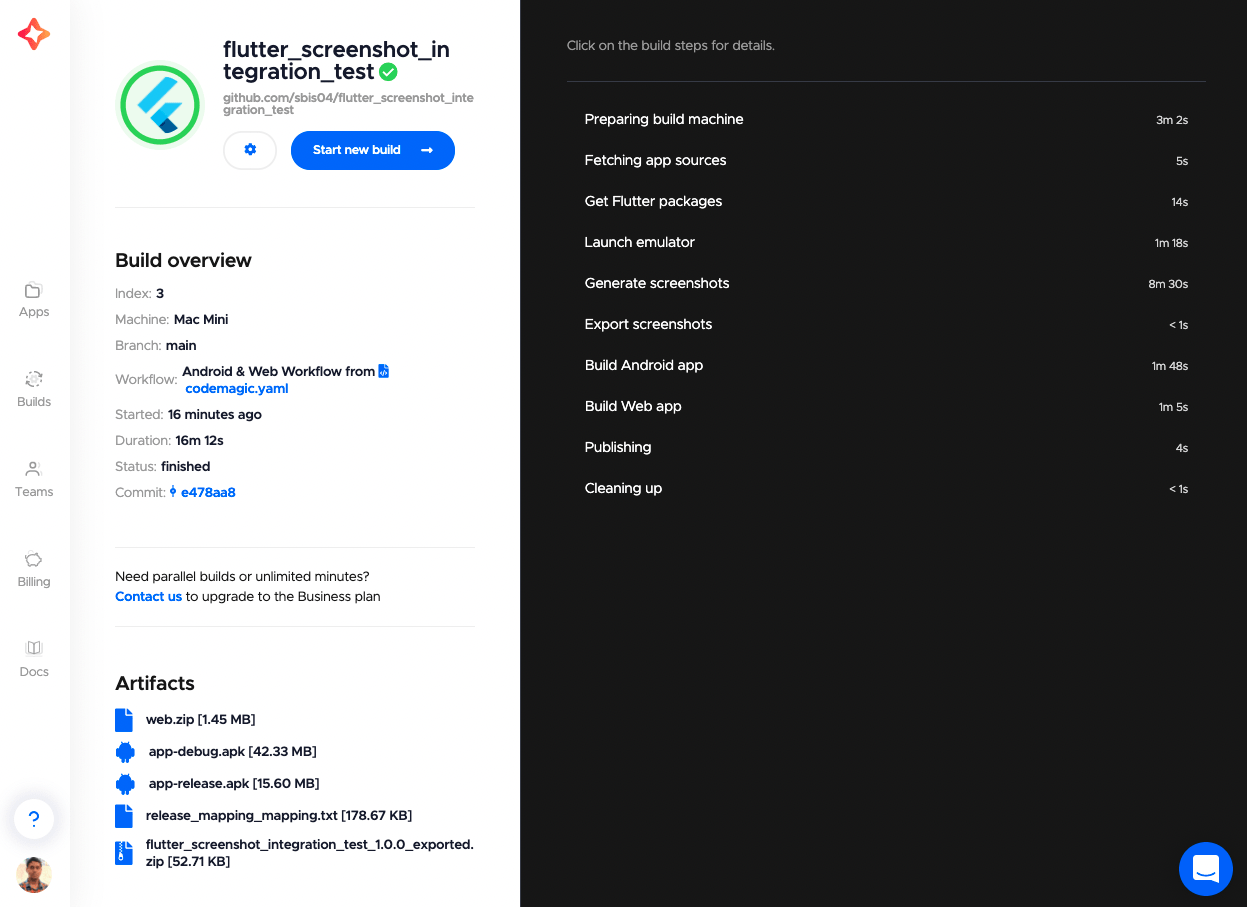