What is Mobile DevOps, and why should you care? 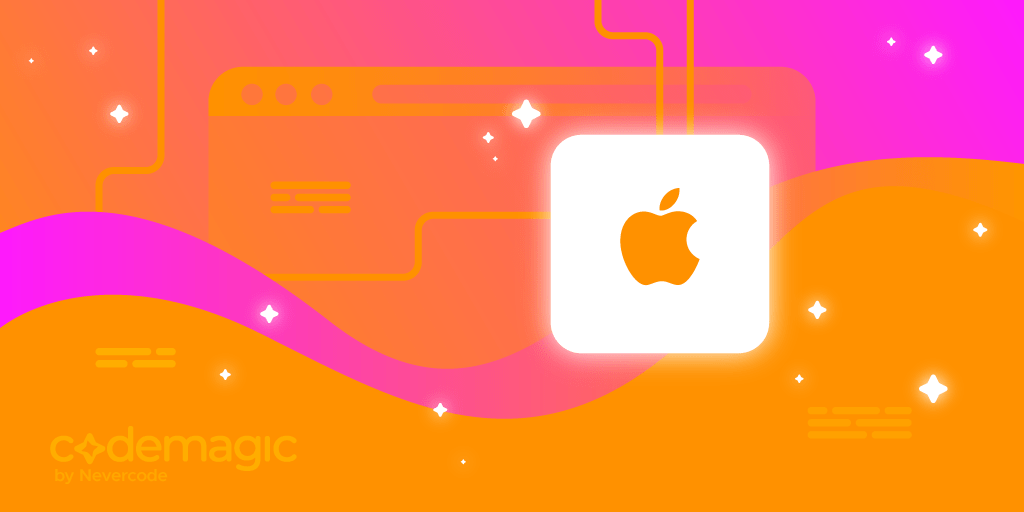 Android apps can be built on any platform, be it Windows, Linux or Mac, but the same cannot be said about iOS apps. While you can write React Native apps for iOS on Windows, you need a special Apple tool, Xcode, to build the app for iOS. One question that comes to mind is this: Why don’t we just install Xcode on Windows to build iOS apps? The problem is that Xcode can only be installed on Mac platforms – it cannot be installed on Windows or Linux. This means that we’ll need to perform a little workaround to build iOS apps on Windows.

In this article, we’ll take a look at how to make iOS apps on Windows with React Native and Codemagic. We’ll cover the workarounds involved in the build process and how Codemagic makes things a lot simpler.

This article is written by Ifeanyi Dike

Build, test and deliver React Native apps in record time
Start now
You don’t need to own a Mac to build an iOS app. Codemagic automates the process Get started

Using Expo is the easiest way to get started with React Native. However, when using Expo, you can’t create custom native modules beyond those that ship with the React Native API. If you want to include native code in your application, it is better to go with vanilla React Native from the start.

To get started with Expo, you first need to install Expo CLI. You can do that by running the following commands:

Expo allows us to build for both Android and iOS on Windows, Mac and Linux. You can run your React Native app on a physical device without setting up the development environment. All you need to do is download the Expo Go app, run expo start and then scan the QR code that shows up.

Open your App.js file and enter the following code.

In the code above, we created a TextInput to hold our to-do text and a ToucahbleOpacity to add the to-do item to our list of to-dos. Once the button is clicked, the to-do item is added to the list by calling setTodos and passing the new to-do. We can also delete a to-do by filtering out to-dos based on their IDs. We can also mark a to-do item as completed.

Configuring app.json file Before building our app for iOS, we have to configure our app.json file. You can find this app at the root of your application. Configurations made in the app.json file are accessible at runtime. This is where you might want to configure things like your app name, splash screen, icon, etc.

Add the following code to your app.json file to configure it for iOS.

All of these fields are required. Take particular note of the bundleIdentifier. It should be in the reverse DNS form, and you can replace it with whatever suits your application. The buildNumber should be incremented whenever you upload a new build of your app to the App Store.

Once you have updated your app.json file, you can build your app by running the following commands.

You can then upload your iOS app to TestFlight and get it up and running on the App Store.

React Native applications built with Expo have a lot of limitations. Apart from having an unnecessarily large size, your app will be hosted on the Expo server. You wouldn’t want to build a serious application with Expo, but it is perfectly okay for beginners.

However, you need Xcode to build an iOS app on Windows with vanilla React Native. In fact, the React Native documentation requires that you set up Xcode right when setting up your environment. However, it is possible to work around this process by installing a virtual machine to contain OS X on Windows.

Installing a virtual machine on Windows

Virtualization with software like VirtualBox or VMware can provide you a platform to install any operating system of your choice, whether it be Mac, Windows or Linux. This offers you an interesting opportunity to install Mac on Windows machines. As you would expect, the first step is to install the virtual machine of your choice on your operating system. You can download a compatible version of the open-source software and install it on your device.

You need a Windows system with a similar capacity to that of a standard MacBook. While there is no hard and fast rule for this, a system with at least 4 GB of RAM and at least a dual-core processor would be preferable. You might want to go for a higher system if you are aiming to build a gaming app or an app that requires high resource usage.

After installing the virtual machine, you’ll need to install Mac OS X. You need an installation disk to do this – you can get this in an Apple store or online. It is important to allocate sufficient memory to the OS. Preferably, you should allocate more than 2 GB of RAM. The virtual machine will configure the OS automatically, but you can perform further configurations if you wish.

Next, you should install Hackboot to complete your installation. The Hackboot 1 and Hackboot 2 ISO files are needed to boot into the installation. You can follow the step-by-step guide here to successfully install Mac OS X on your virtual machine.

Once you have installed Mac OS X, the next step is to install Xcode on your virtual machine. This is a relatively straightforward process. Log in to the App Store and search for Xcode. Xcode is a large application that requires over 11 GB of space, and it should take a few minutes to download and install on your device.

Now that we have installed Xcode and Mac OS X on our virtual machine, let’s create a simple React Native project and build it with Xcode to demonstrate the concept.

Open up the terminal and run the following bash commands to get started.

It will take a few minutes to create our React Native project, and we can get started when done.

To demonstrate our concept, we’ll be creating a simple to-do app for iOS. Although React Native allows us to build on both Android and iOS, we’ll be focusing on iOS alone.

You can make use of the code in the Expo section or access the complete code here. If your Xcode is properly installed, you can run your app with the following commands:

Building and signing the app with Xcode

To build our app, we need to first configure it for release. If you have used additional dependencies in your app, make sure to install them properly in the iOS version by using the following commands.

After that, you can build your app. Before building, click on the General tab and make sure that the details are correct. In particular, make sure that the Bundle Identifier corresponds to what you have in your project. You can check under ios → simple-is-todo.xcodeproj → project.pbxproj and then search for PRODUCT_BUNDLE_IDENTIFIER. Here, the bundle identifier could be in the form org.reactjs.native.example.$(PRODUCT_NAME:rfc1034identifier), where $(PRODUCT_NAME:rfc1034identifier) may represent your project name.

After verifying the details, you can then click on Build under the Product menu to build the project. Depending on the size of your app, the project may take a couple of minutes to build.

After building the app with Xcode, you can then configure the app deployment to the App Store. This may require you to go through quite a process, but you need to enroll in the Apple Developer Program to do this. You’ll also be required to pay a yearly membership fee of 99 USD.

Automating the build process with Codemagic

Do you really need to go through the stress of installing a virtual environment to build an iOS app on Windows? Codemagic provides a way out.

Codemagic provides a robust CI/CD process that automates the build process for mobile apps. You can save yourself a lot of stress by building your React Native code on Codemagic. Furthermore, Codemagic can also handle the use of environment variables and a lot of advanced stuff for React Native.

You can create a vanilla React Native app and write code on your favorite editor, then allow Codemagic to handle the build process for you. This means that Codemagic will handle the app signing and other processes and make your app ready for distribution to the App Store. Of course, you would need to obtain the necessary credentials and assets from your Apple Developer account to proceed.

To build your app on Codemagic, you need to first sign up to the platform and connect your repository to your account. Once you have connected your repository, you’ll see a list of all projects under the repository. You can add any repository by clicking Set up build. Once you do, you’ll be prompted to choose the type of project, and here, we’ll select React Native App and click Continue.

You’re expected to populate the configuration file with some configuration settings that will enable Codemagic to build your app. Interestingly, Codemagic has comprehensive documentation on YAML and a guide on code signing YAML on iOS that you can follow to properly customize your app.

Here is an example configuration setting we could follow.

The code above is for automatic iOS code signing, but you could also manually code sign your app by setting the following environment variables.

The codemagic.yaml file must be properly indented, or else it will throw an error in the Codemagic dashboard.

It is possible to build an iOS app on Windows with React Native. With efficient tools like Codemagic, you don’t need to own a MacBook to build an iOS app. Codemagic automates the process of deployment and handles all the difficult jobs for you. That way, all you have to do is focus on building your app.

Ifeanyi Dike is a software developer in Abuja, Nigeria. He started coding with Microsoft Visual Basic in 2005 but soon after delved into Python and Javascript.

He’s been actively developing software for over seven years now and has used several webs and mobile frameworks like ReactJS, React Native, Express and Flutter. You can reach him on Twitter @deepinsideai.

What is Mobile DevOps, and why should you care?

Who is who in the React Native community? Find your role models to follow and improve your React Native dev skills in record time.

Publishing your app to App Store Connect or Google Play? Learn about several approaches you can use for build versioning on Codemagic.
Show more posts