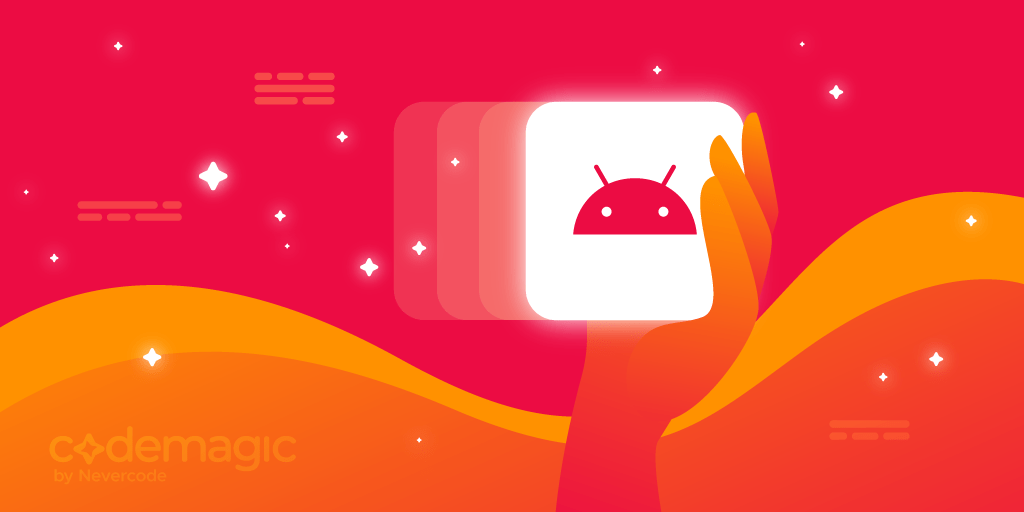 Every Android project needs to be digitally signed with a certificate before the generated APK (Android Application Package) or AAB (Android App Bundle) can be uploaded to the Google Play Store or other app stores.

The code signing process for any Android app is pretty straightforward if you are working individually on the project. You can perform the code signing directly in Android Studio, which will generate the signed bundle/APK file using a Java KeyStore.

In a team environment, it gets a bit challenging to share the key with other members and make sure that it remains secure. If your project repository is private, you might want to keep the Keystore file in the repo itself. Even if the repository is private, it’s a security risk to just upload any key onto the world wide web. If you really want to store your keys/certificates in the version control system, then the best method is to use git-secret.

But there’s still an issue.

In this article, we will take a deep dive into how you can store your Keystore file securely and easily sign and release your app to the Google Play Store using Codemagic CI/CD.

Using Codemagic, you can easily encrypt sensitive values and files and store them securely in the environment variables of the configuration file (codemagic.yaml). Encrypting any file on Codemagic automatically encodes it to base64 format so that you have to decode the file during the build before using it.

Codemagic gives you access to encrypt variables both with a personal account and with a Team account. Codemagic generates the encrypted variables on a per-app basis.

For security reasons, encrypted environment variables only work on the account on which they were created. When moving an app from your personal account to a team, or from one team to another, you should re-encrypt the variables.

Members of a team account can have three types of user roles:

These roles in Codemagic Teams make it easier to keep any sensitive credentials secure and make the project more manageable.

Follow along to learn in detail how to build and release your Android projects securely.

If you haven’t generated the Keystore file yet, you can do so using the following command:

Run the command above in the directory where you want to store this Keystore file. Make sure it is stored securely and is not checked into the version control system by mistake. This is a very important file, as it is required both for signing your app for the first time as well as for publishing any future updates to the app.

You have to make a few modifications to your app-level build.gradle file in order to set it up for code signing.

To use Codemagic for signing your builds, add the following signingConfigs:

Inside buildTypes release, add the following:

Codemagic will need access to the Keystore file for signing your Android app. As it’s a sensitive file, you shouldn’t give direct access to it. A more secure method is to encrypt the file before storing it so that Codemagic can access it during the build.

To encrypt the Keystore file, go to your Codemagic project Settings, and you will notice an Encrypt variables button. Click on it. 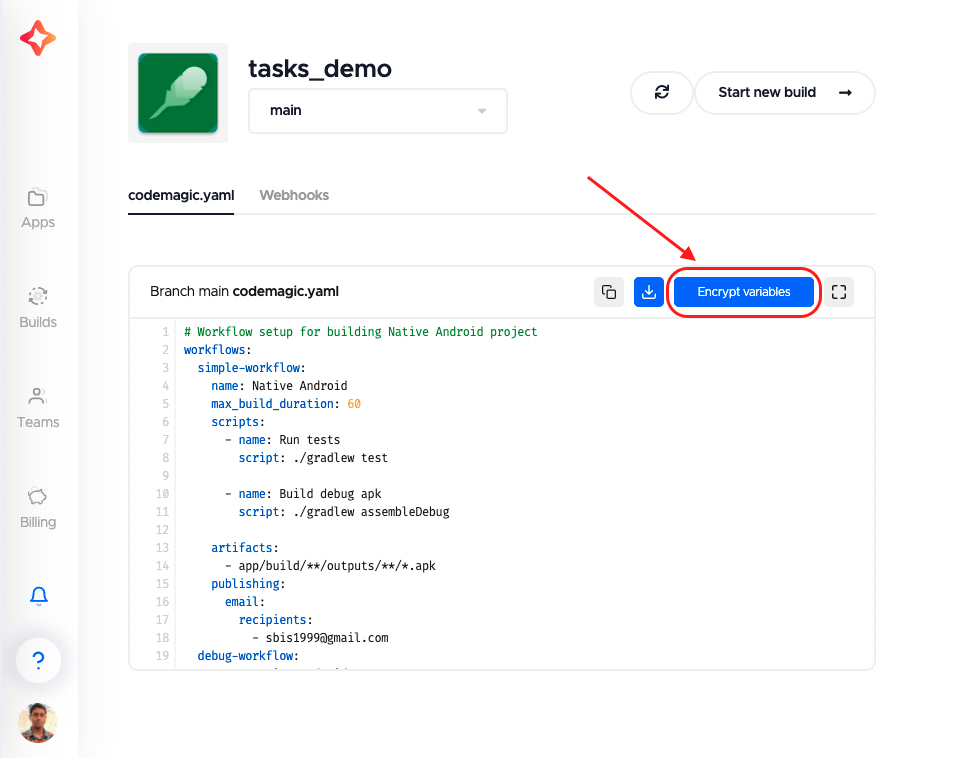 Now, you can drag and drop the file here. 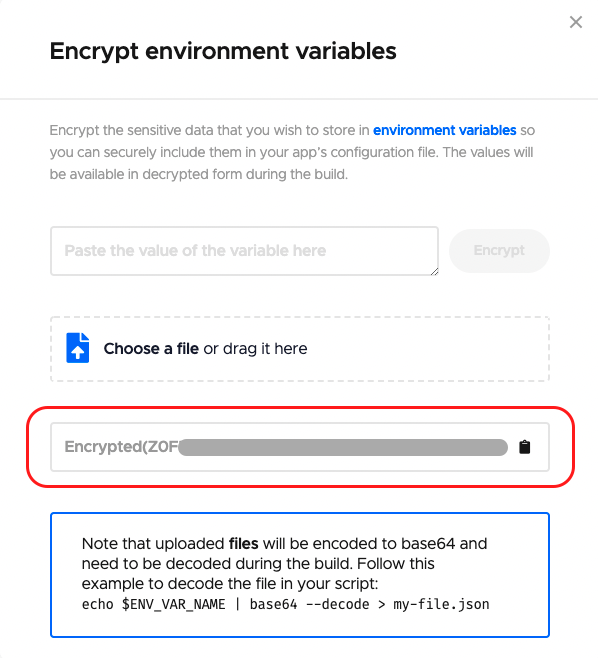 This will generate an encrypted version of the file. You will require this in the next step while defining your workflow inside the codemagic.yaml file.

In the root project directory, create a file called codemagic.yaml. Inside it, we will define a workflow for generating a code-signed build of the Android app. Add the following to the file:

Add the encrypted values to their respective variables. Also, change the email under the publishing section.

For building the project, add the following to the scripts section:

This will decode the base64-encoded Keystore file and generate the code-signed build of the Android app.

Set up for releasing

After creating the service account, add the following to your codemagic.yaml file under the publishing section:

There are various customizations that you can apply to the release. Learn more about them here.

Building the project on Codemagic

Before starting a build on Codemagic, make sure that you have committed the codemagic.yaml file to the version control system. You can either manually start a build or set up build triggering.

Start your build manually on Codemagic in two steps:

This will start a new build for your Android project. 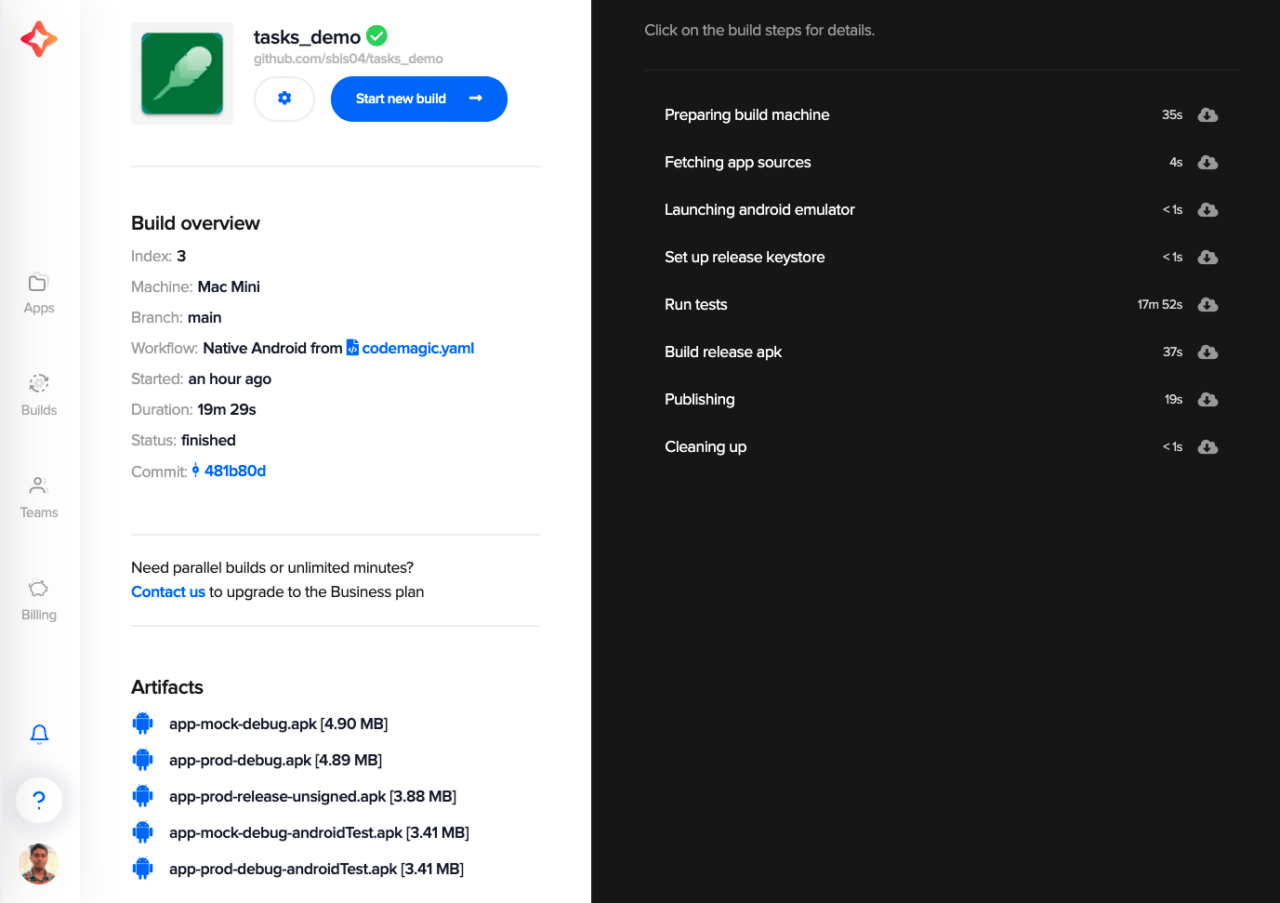 Congratulations! 🎉 You have securely built your Android project and published the code-signed app to the Google Play Store.

This article should have given you some insight into how Codemagic helps you keep your sensitive credentials secure while collaborating on an Android project. The user roles of the Codemagic Team account make it even easier to manage your project and help to restrict access to sensitive keys/files to only the specified members.

Souvik Biswas is a passionate Mobile App Developer (Android and Flutter). He has worked on a number of mobile apps throughout his journey. He loves open-source contribution on GitHub. He is currently pursuing a B.Tech degree in Computer Science and Engineering from Indian Institute of Information Technology Kalyani. He also writes Flutter articles on Medium - Flutter Community. 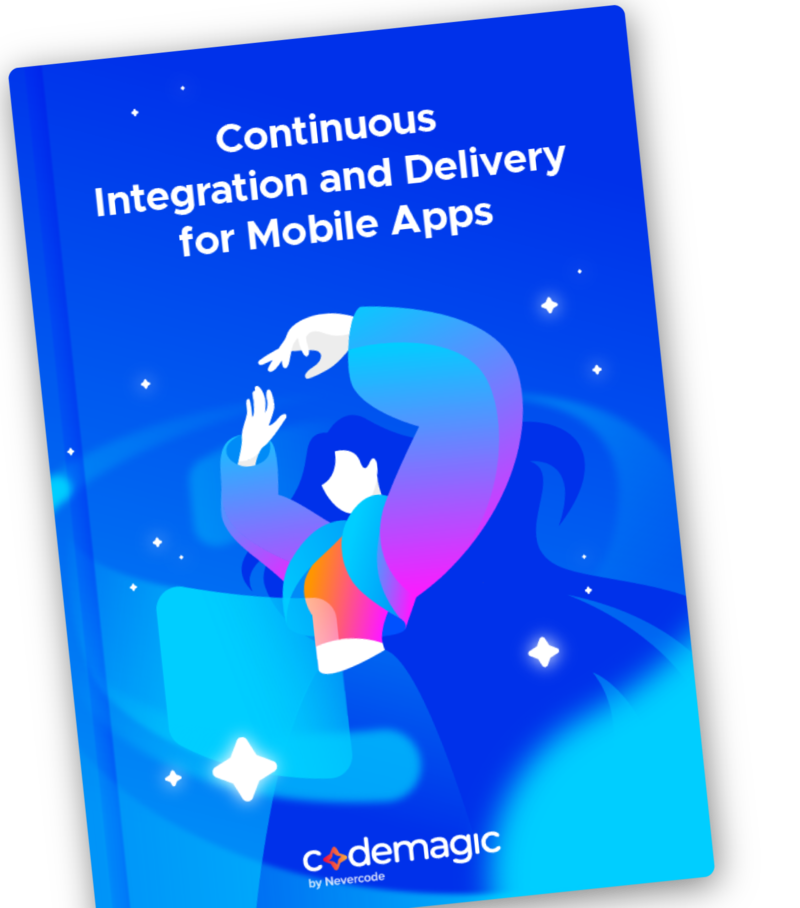